Throughout the year, the kids create an alphabet book to take home and it is filled with crafts that they make - each letter of the alphabet having it's own craft. The apple craft we did last year went over really well, so we did that one again this year. 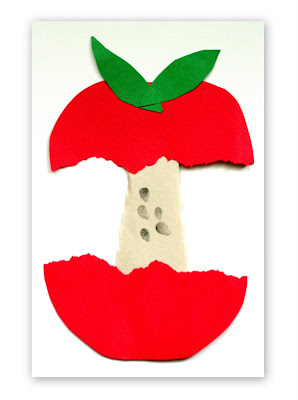 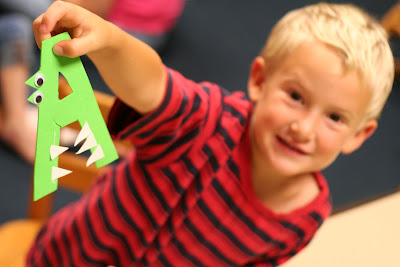 I can't take credit for this too-cute alligator Aa. No Time for Flash Cards has directions for the craft. We used foam sheets that I picked up at the Dollar Tree along with construction paper teeth and googly eyes. Super fun and a cute take home for the kids to remember the letter we studied!

Apples were the primary focus of the week, so during our circle times we had several different activities we used to focus on different math skills. 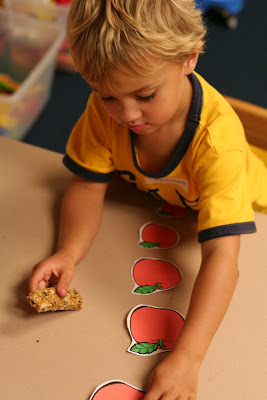 I printed off a page of different sized apples from File Folder Fun and cut them out and the kids took turns putting them in order from smallest to largest.

Apple Tree felt board ~ How does an apple grow? I have a cute little apple tree that we used on the floor to show how apples grow. We put flower blossoms on the tree first and then they 'grew' into big and little apples. We picked the apples off the tree and sorted them by big and little and counted to see which one we had more of.

Cuisenaire Rods ~ We used cuisenaire rods to build the letter Aa. First we used the big rods and then tried using the little ones. We also made an apple tree, airplane and an alligator with the rods {this is something I did with Zachary, not the class!}. :) 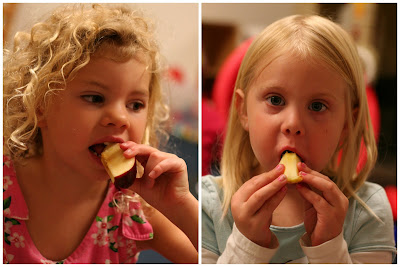 The biggest hit of the day revolved around taste-testing apples. I brought in three different colors of apples and sliced them up. Everybody took a bite of each apple slice and then we talked about how the apples tasted {sweet, sour, tangy, etc...}, the different colors of the apples, and everyone voted on their favorite tasting apple and we graphed the results.

Golden Delicious was the winner by ONE vote...why those kiddos liked the Granny Smith is beyond me....

During our circle time we did several songs and games together. After reading through The Lady with the Alligator Purse, I sang the song to them while 'reading' the book again {I love that book!}.

We passed around a little apple {like playing Hot Potato} while singing the song below and whoever was left holding the apple got tickled!

Apple tree, apple tree,
Will your apples fall on me?
I won't cry, I won't shout,
If your apples knock me out!

A tisket, a tasket; want to weave a basket? Using an old strawberry basket, show your child how to make a pretty basket with a handle—a great way to celebrate Little Red Riding Hood. Weaving ribbons through the holes is good for hand-eye coordination and patience. She can use pastels to make this into a darling Easter or spring-themed basket, or simply track down ribbons in her favorite colors.

There are conflicting views on whether students should be assessed using a book they have never read versus using a book they are familiar with. We believe using a book that has not been previously read will give a more accurate measure of a student's ability to handle text at the assessed level. For this reason, we provide two benchmark books at each level: one fiction and one non-fiction. You can always opt to read the book before doing a running record if you prefer using previously-read text for your running record.

After completing a running record, you may want to assess a student's comprehension of the book read. Reading A-Z provides Retelling Rubrics for this purpose. Both fiction and non-fiction Retelling Rubrics are provided.

Taking a Running Record
Running records are taken most often at the earlier stages of reading. Students who are not progressing at the expected rate should be assessed even more frequently than the schedule suggested below.

Marking a Running Record Form
Several terms are used when marking a running record form. You should become familiar with these terms by reviewing the explanations below.

There are two steps to marking a running record. Step 1 involves marking the text on the running record form as the student reads from the benchmark book. Before taking your first running record, become familiar with the symbols used to mark a running record form. These symbols are found in Table 1. Also review the Sample Running Record to see how a completed form looks. It also is a good idea to take a few practice running records by role-playing with a fellow teacher as she/he plays the role of a developing reader, intentionally making errors for you to record.

Once the student has read all the text on the running record form and you have recorded their reading behavior, you can complete Step 2. In Step 2 you fill in the boxes to the right of the lines of text you have marked. Begin by looking at any error the student has made in the first line. Mark the number of errors made in the first box to the right of the line. If the student self corrected any of these errors, mark the number of self-corrections in the second box to the right of the line. Next determine whether the errors and self-corrections were made as a result of meaning, structure, or visual cueing. For a description of each of these cues, review the explanations provided above. Write MSV in each box for each error and a self-correction made and circle the appropriate letter for the cue used by the student.

After completing step two you should total the number of errors and self-corrections and write each total in the box at the bottom of the appropriate column. Next calculate the student's error rate, accuracy rate, and self-correction rate, found in the next section Scoring and Analyzing a Running Record.

You do not have to mark the MSV cueing portion of the running record form. It is simply used to help you further analyze a student's reading behavior and provide deeper insight into a student's possible reading deficiencies. You can still use the information on error, self-correction, and accuracy rates to place the student at the developmentally appropriate instructional level.

Scoring and Analyzing a Running Record
Scoring: The information gathered while doing a running record is used to determine error, accuracy, and self-correction rates. Directions for calculating these rates are given below. The calculated rates, along with qualitative information and the student's comprehension of the text, are used to determine the student's reading level.
Qualitative Analysis: The qualitative analysis is based on observations that you make during the running record. It involves observing how the student uses the meaning (M), structural (S), and visual (V) cues to help her/him read. It also involves paying attention to fluency, intonation, and phrasing. Think back to the prompts you offered and how the student responded. These observations help you form a picture of the student's reading development.

The formulas below were used with the sample running record above.

Error Rate
Error rate is expressed as a ratio and is calculated by using the following formula:

You can use accuracy rate to determine whether the text read is easy enough for independent reading, appropriate to use without frustration during reading instruction purposes instruction, or too difficult for the reader. The breakdown of these three categories is as follows:

Self-Correction Rate
Self-correction rate is expressed as a ratio and is calculated by using the following formula:

The self-correction rate is expressed as 1:4. This means that the student corrects approximately 1 out of every 4 errors.

If a student is self-correcting at a rate of 1:4 or less, this indicates that she/he is self-monitoring her/his reading. 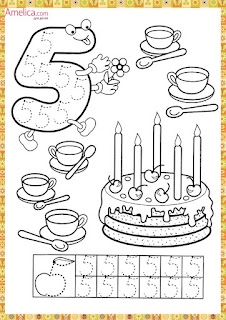